Our Year in Review

As we mark another year of local philanthropy, it’s important to reflect. Yes, on the year itself, but also on the many moments that made it meaningful. Our impact is a collection of heartfelt choices and human interactions, and this personal touch fades away when we focus solely on dollars raised or grants provided.

Behind our financials are dynamic stories, and we all have the ability to write our own. No matter what moment we find ourselves in, an opportunity to give will eventually arise. Our board and committee members seize this opportunity by volunteering to help guide our organization and uphold its commitment to the community. Our fundholders and donors welcome it with generous hands and the vision of creating a better tomorrow for others.

These contributions are made with the hope of creating incredible moments, no matter how small or large each might seem. The proud smile of a student at graduation; the comfort of a meal at home; the enthusiasm of a small business owner; the power of people working toward a common cause; all are important signs of progress and prosperity.

When your opportunity arrives, the Community Foundation is ready to help make stories like the ones featured in the following pages possible. We understand the heart of giving and are honored to carry out this important work on behalf of our donors, local nonprofits and the larger community.

The issues we’re addressing together are urgent, and every moment counts.

To begin reading, scroll down or click a link below to be taken to that article –

Gabrielle Karber and Corbin Thomas pipe dye into the tiny wells of a gel electrophoresis tray, while explaining the process that’s about to unfold. Karber says, because DNA is negatively charged, it will travel through the gel toward the positively charged electrode at the other end of the tray. Thomas points out that shorter DNA strands move quicker than longer ones, thus revealing a unique makeup.

You might expect to see this advanced DNA visualization in a modern forensics lab. Karber and Thomas, however, are juniors at Vancouver iTech Prepatory. 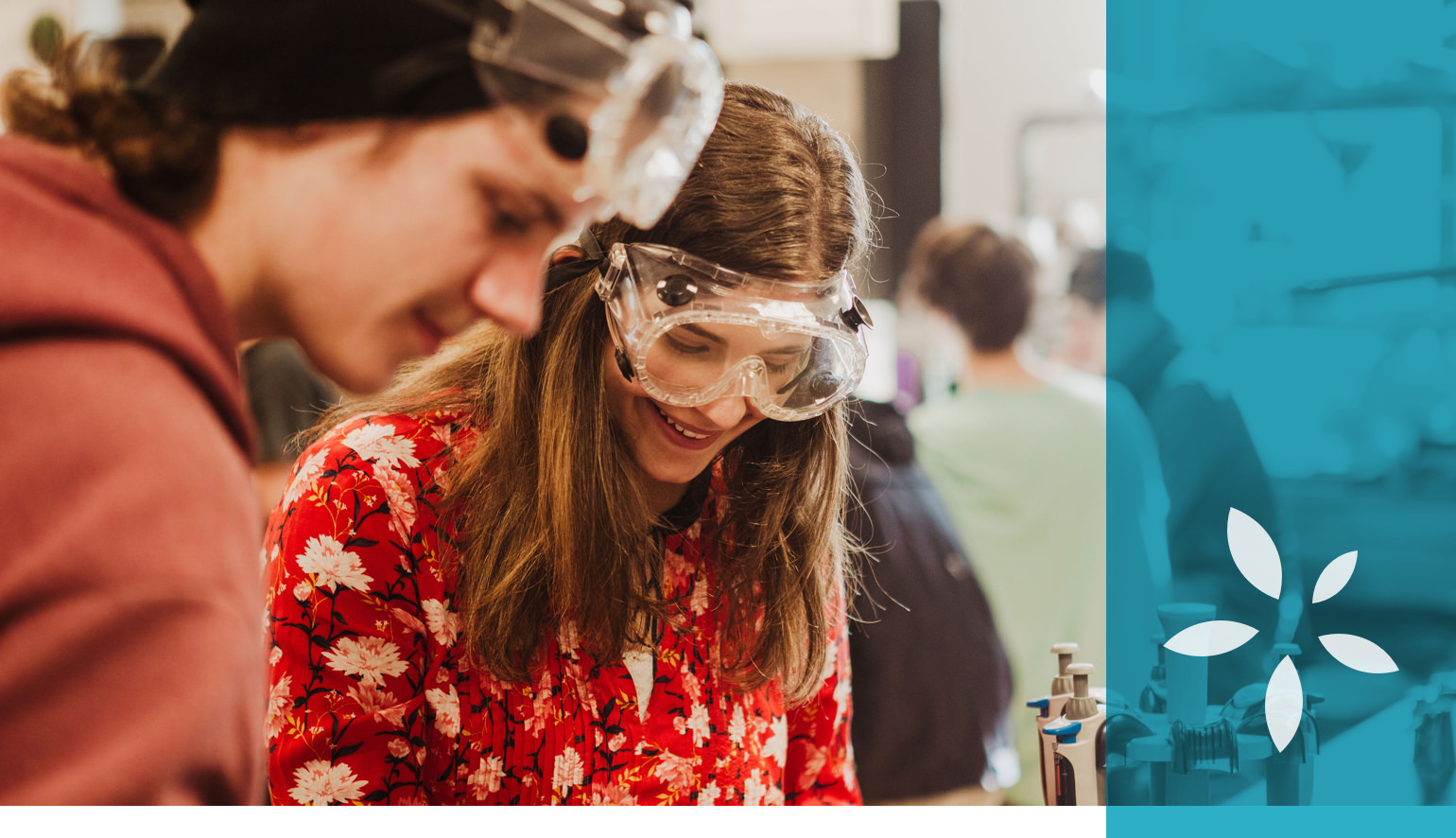 Much like the DNA strands they described, students at iTech are energized through a cutting-edge curriculum and can excel at different paces. That’s because iTech’s high school campus is located at WSU Vancouver and partners with the university to offer higher level curriculum for eager and excelling students. Doing so has built a culture of achievement and an excitement for learning.

Jim and Shirley Johnson, two Community Foundation fundholders who believe deeply in the power of education, recognized this “magic” and wanted to become catalysts for the instruction happening at iTech.

They tapped Anne Digenis, Senior Philanthropic Advisor, to ask school leaders what they needed most. The list was lengthy, but they noticed a theme: the desire to provide students with equipment that was beyond the district’s budget.

The Johnson’s have since provided the DNA fingerprinting equipment Karber and Thomas are using, as well as a computer connected microscope for examining cells, a 3-D printer for modeling prototypes and much more.

The Johnson’s vision is to ensure that iTech students can work toward that next level. And with a lottery process open to all students in Vancouver Public Schools, iTech offers that opportunity to kids from all backgrounds.

“You don’t know what potential lives inside people. Education opens that up,” Jim Johnson said. “That’s why access to high-class learning is important, because you don’t know where that next great scientist, writer or engineer is going to come from.” 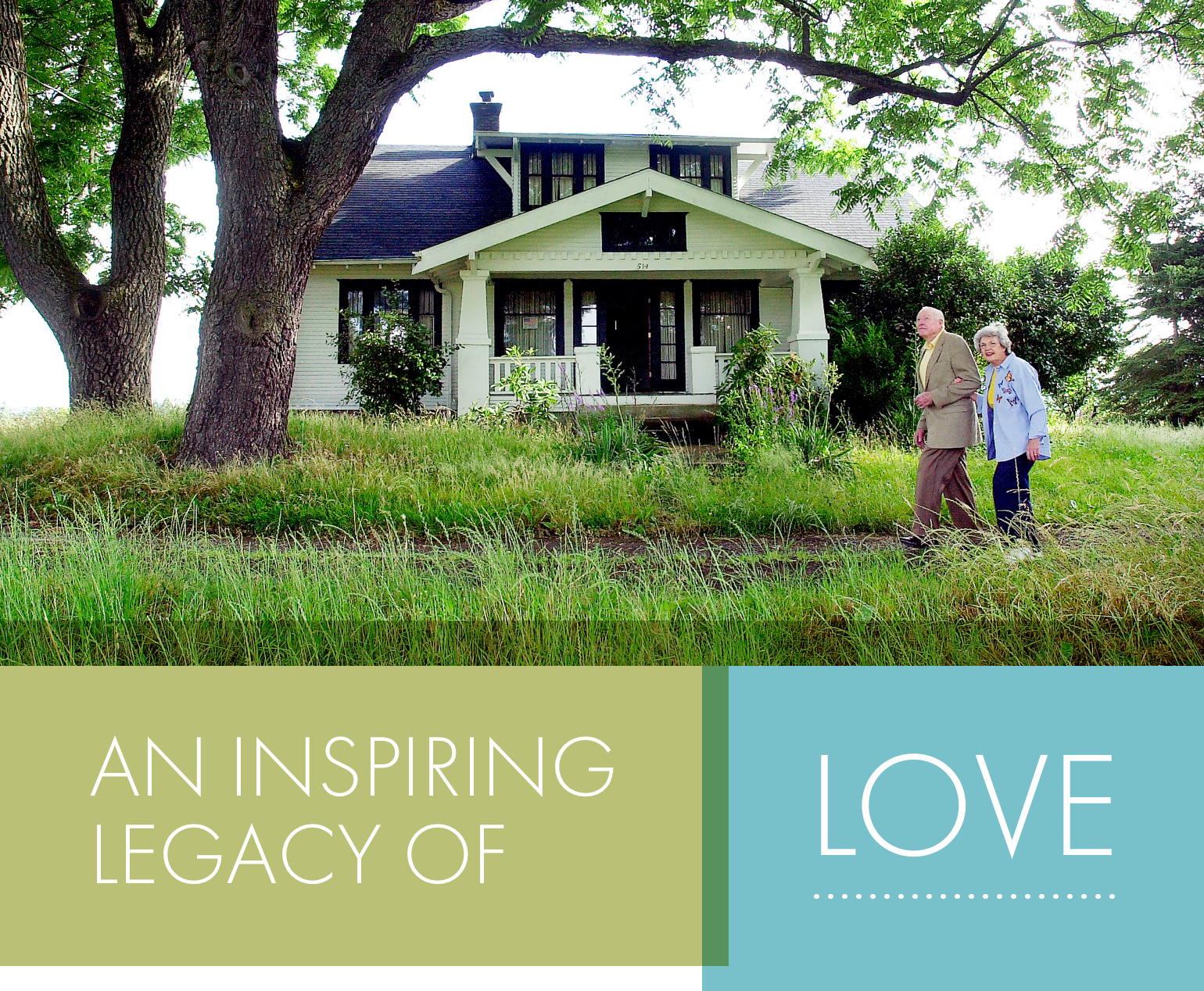 Ed and Dollie Lynch were very much in love. With each other yes, but they also fell for southwest Washington. Here was the place they chose to call home after passing through more than a dozen cities while Ed rose through the ranks of Peter Kiewit Sons construction. The region’s distinct sense of place—rich in history, independent in spirit and inviting to all—caught their eye.

Soon they began shaping its future through gifts of time, talent and treasure. With Ed’s thoughtfulness and Dollie’s exuberance, they made an incredible philanthropic force. Over the course of nearly six decades they played a part in almost every significant nonprofit and civic endeavor. Not one for fanfare, Ed often simply said, “We’ve done what we’ve done because it’s the right thing to do.” 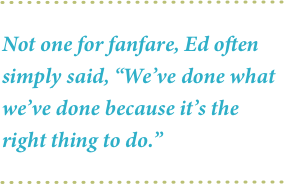 But those who knew Ed and Dollie well, knew that their inimitable generosity was fueled by more than right and wrong. Dollie found fulfillment in touching lives and building community, and Ed was fascinated with addressing local needs and identifying what made successful nonprofits tick. Together, they gave so much that the impacts would long outlast them. Still, they chose to do more.

Working with the Community Foundation, Ed built a bridge that connected their life’s work in southwest Washington to an ongoing charitable legacy. In turn, a stunning 99 percent of their estate was directed into the Ed and Dollie Lynch Fund. This provided a flexible way of supporting local causes for years to come.

What’s more, their legacy will serve to inspire future generations. For a couple that often said they “couldn’t accomplish anything alone,” this was the ultimate goal. While they encouraged dozens of friends and colleagues to give over the years, they always dreamt of having every hand pitch in to lift the community they loved even higher. What a wonderful dream to have!

Craig and Karen Riley give in very traditional ways, but what fuels their philanthropy is anything but common.

Sacrifice. Adversity. Vulnerability. Instinct says to avoid these experiences. Yet for Craig and Karen, the hardships are a big part of what makes the act of giving so rewarding. 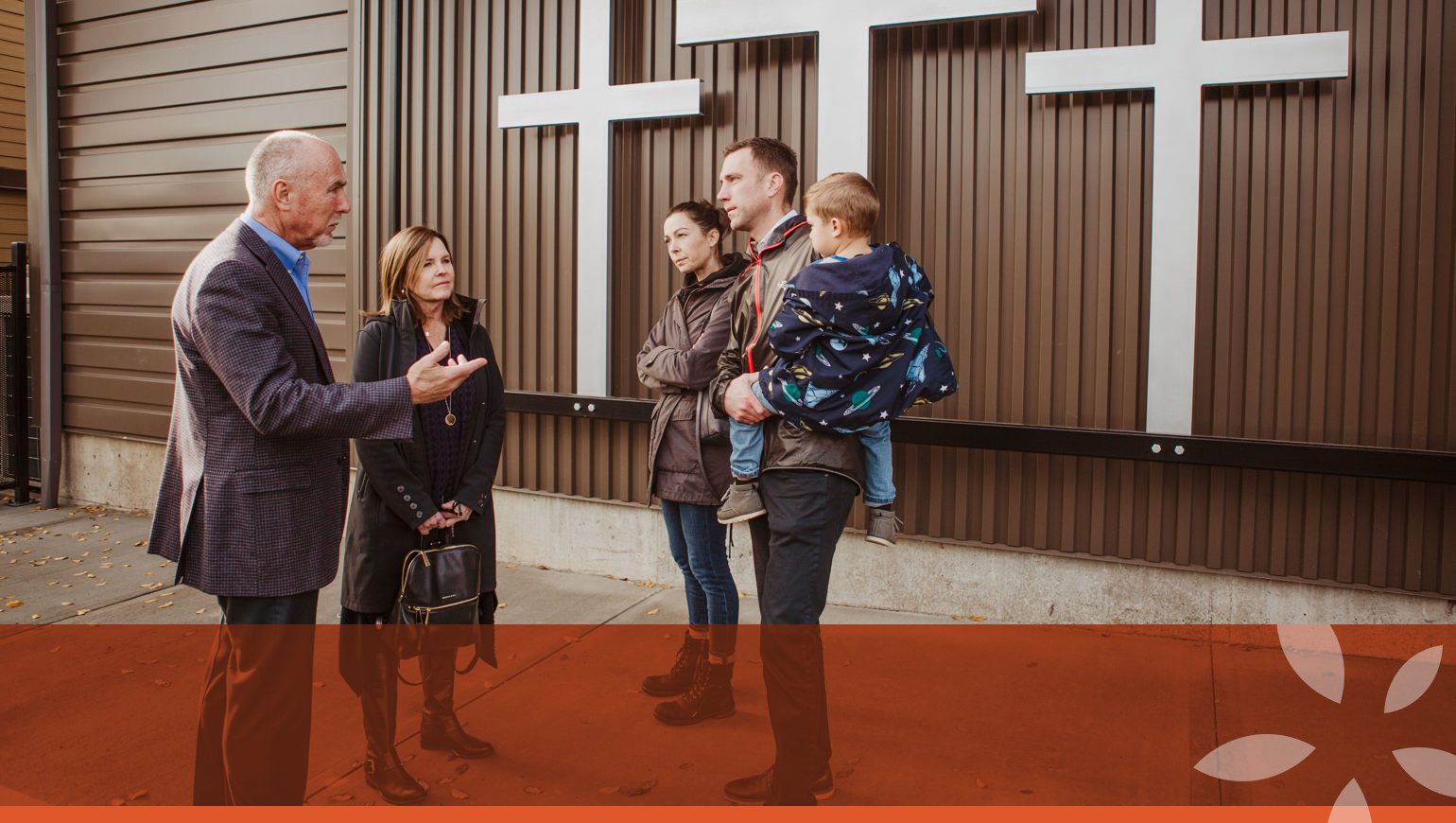 It was ingrained into their early memories of giving. Karen recalls the work that went into pooling her allowance and selling homegrown vegetables to support missionary trips as a young girl. Craig remembers joining a street ministry and waking up to the daily challenge of helping forty housemates navigate recovery and redemption. 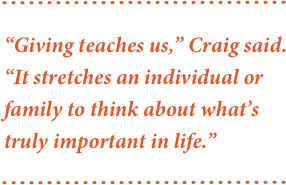 When it came time to consider retirement, and the fate of their growing business, the couple reached an unexpected conclusion. Instead of packing it in, they chose to use what they’d built as a means to give more to causes that align with their values of faith and family. Then came something else unexpected: an outpouring of support and new business.

“Whether we give a smile, money, time or whatever it is, we find that rewarding aspect coming back to us ten, one-hundred, a-thousand fold.”

As their giving increased, managing the funds became more complex. So to keep things in order, they opened a donor advised fund at the Community Foundation for Southwest Washington. In the process, they also discovered a way to hand down the gift of giving to their children. They could name their children as successor advisors on the fund, and have the Community Foundation act as an objective, supportive, convenient and credible courier to carry out their wishes.

Craig asked himself, “Why just give an inheritance? If there is inheritance with a responsibility attached to it, that’s something more.”

To them it’s the prospect of passing down their family values, as well as the belief that life is more fully lived with an open and grateful heart. 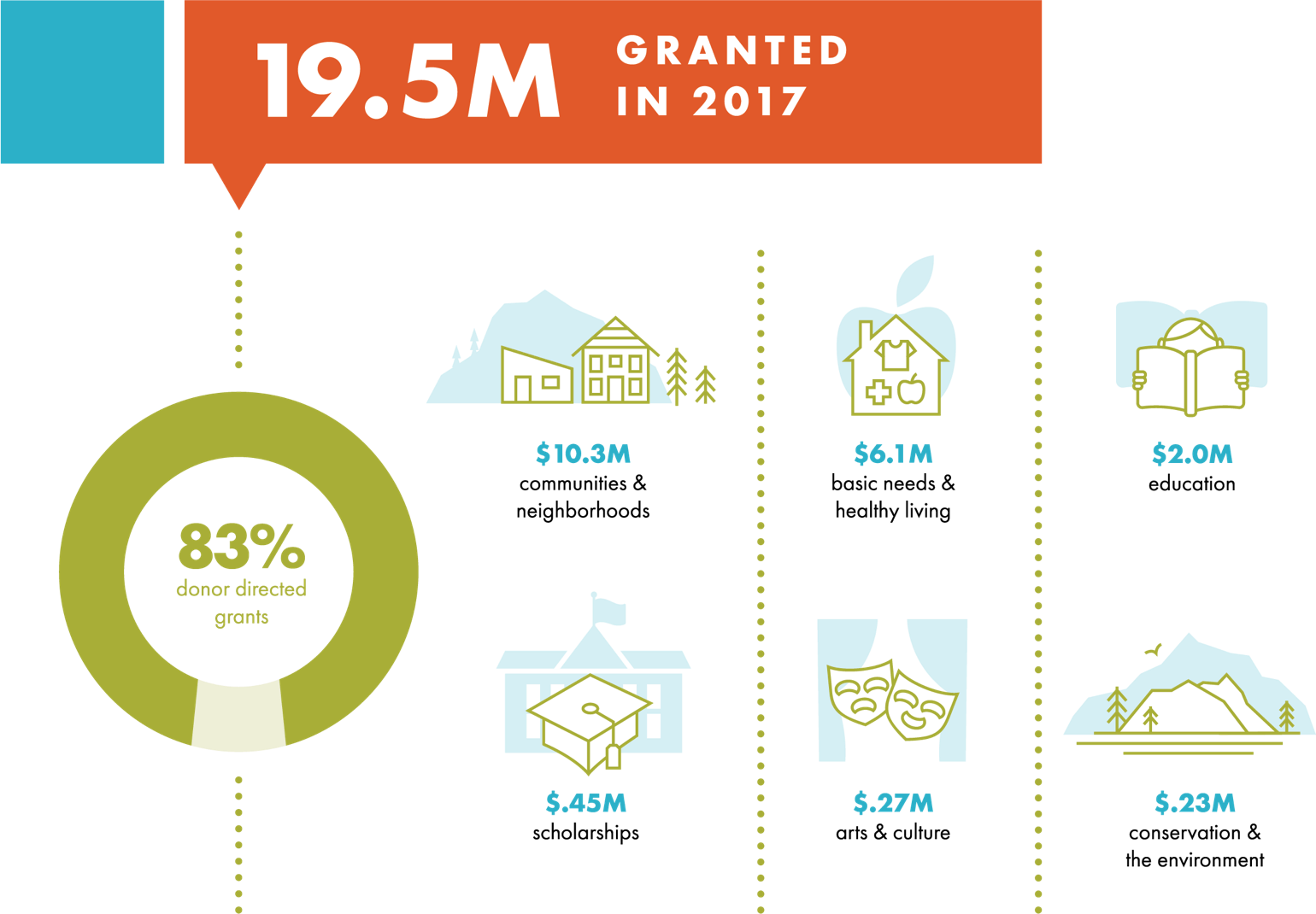 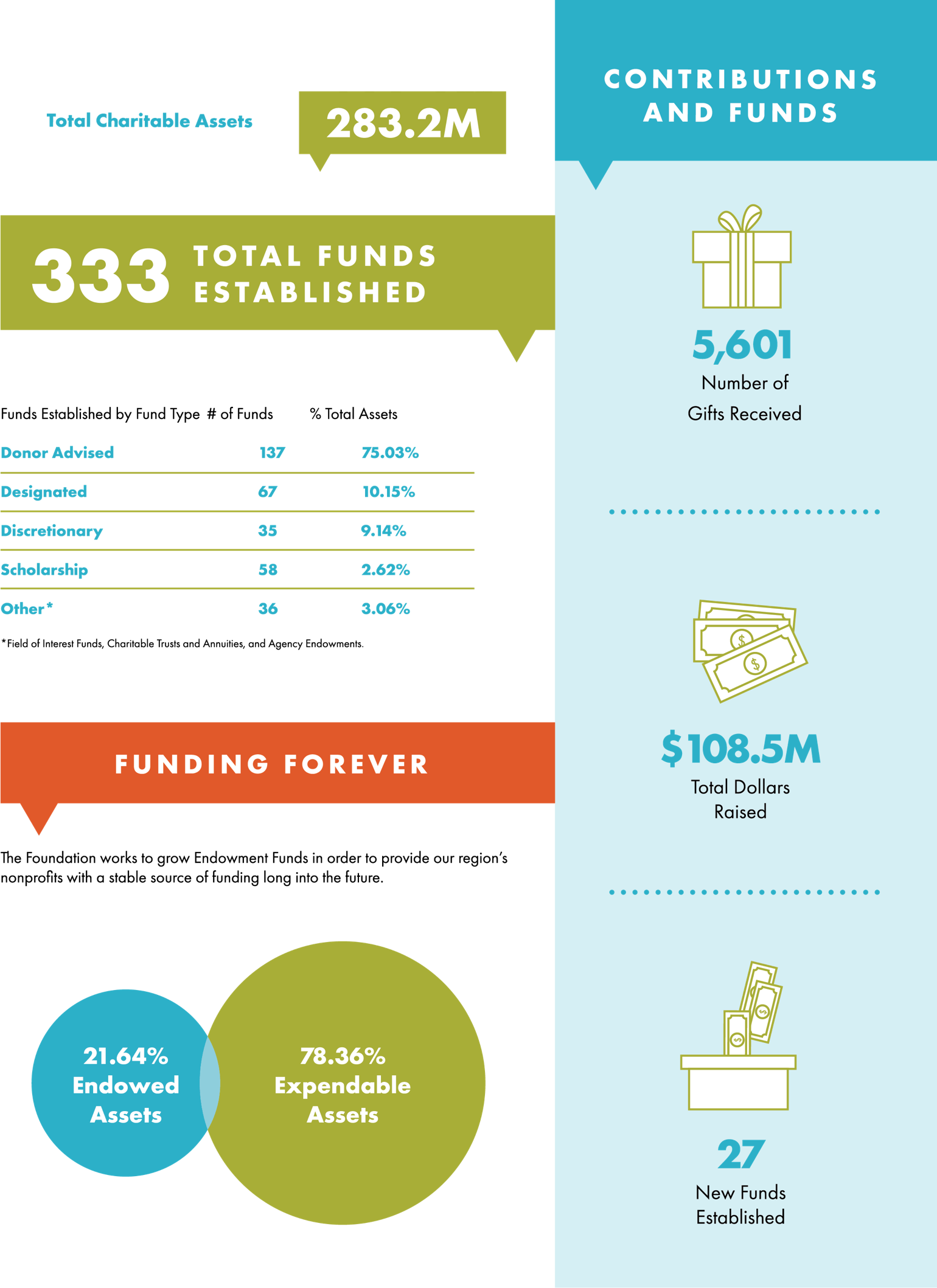 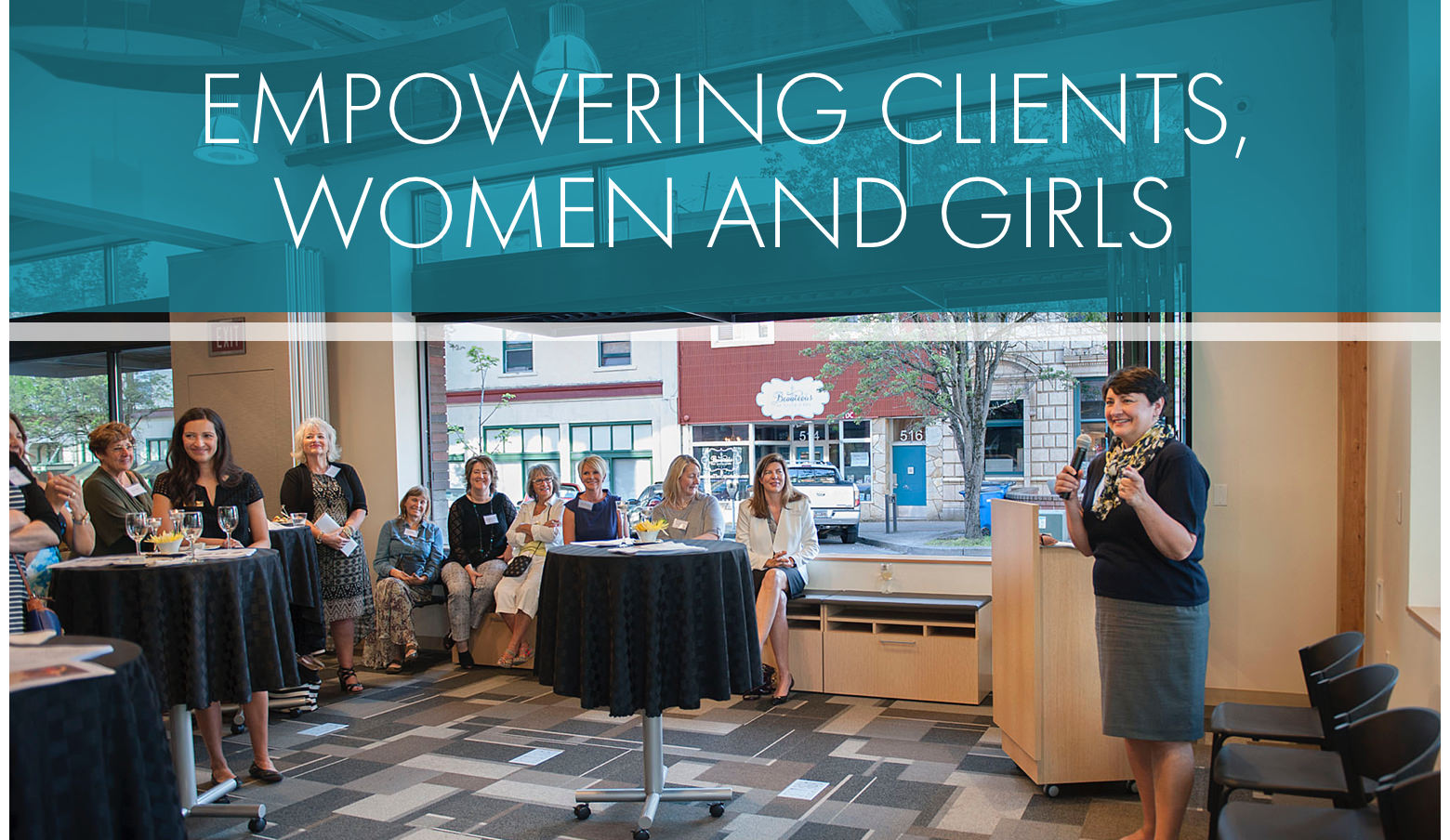 A long list of real-life female figures and mentors encouraged Lisa Lowe to pursue her dreams of practicing law. Finding this path was difficult though, because popular shows like Columbo often cast men as lawyers. Luckily, Lowe was able to find inspiration in the mother of a middle school classmate—an attorney that broke Hollywood’s mold.

“I’ve never been told by anyone in my family that there was something I couldn’t do,” Lowe recalls. “The pages were blank, and I could do what I wanted.”

Because of that support and modeling, Lowe was able to achieve her dreams. Today she’s a shareholder, board member and the Partner in Charge at Schwabe, Williamson & Wyatt’s Vancouver office. She is also the chair of the Community Foundation for Southwest Washington’s Professional Advisory Council (PAC). Her practice is focused on all areas of estate planning and administration, including trusts and probate. 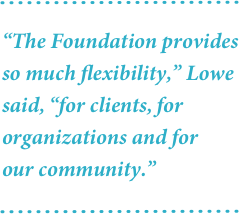 She has tapped the Community Foundation’s expertise on behalf of her clients for a number of years, but credits joining the PAC for introducing her to the full gamut of the Foundation’s work in southwest Washington, as well as its potential.

Lowe has partnered with the Community Foundation in helping clients set up funds that support multiple causes and also served on a nonprofit board that established an endowment fund to ensure its long-term sustainability. More recently, she helped found a giving circle called Empower Women + Girls. Thanks to the Foundation, the easiest part was establishing a mechanism for pooling the group’s contributions and distributing grants that celebrate, promote and empower women in Clark County.

For her, the Foundation serves as both a professional and personal partner. She’s grateful for both. Especially to have the opportunity to pay her experience forward, so that more local girls are given the same blank pages she received in middle school and—with them— the opportunity to write their own dreams.

Seemingly small obstacles can hold people back in huge ways. That’s the case for many of the clients who walk into Lighthouse Community Credit Union in Vancouver, including Charlton Sanchez.

He’s a resourceful, 57-year-old Army veteran who has gone to college, operated cranes and driven buses for tech firms and tourists alike. Yet, after his job became one of the millions lost in 2008, he struggled to recover. 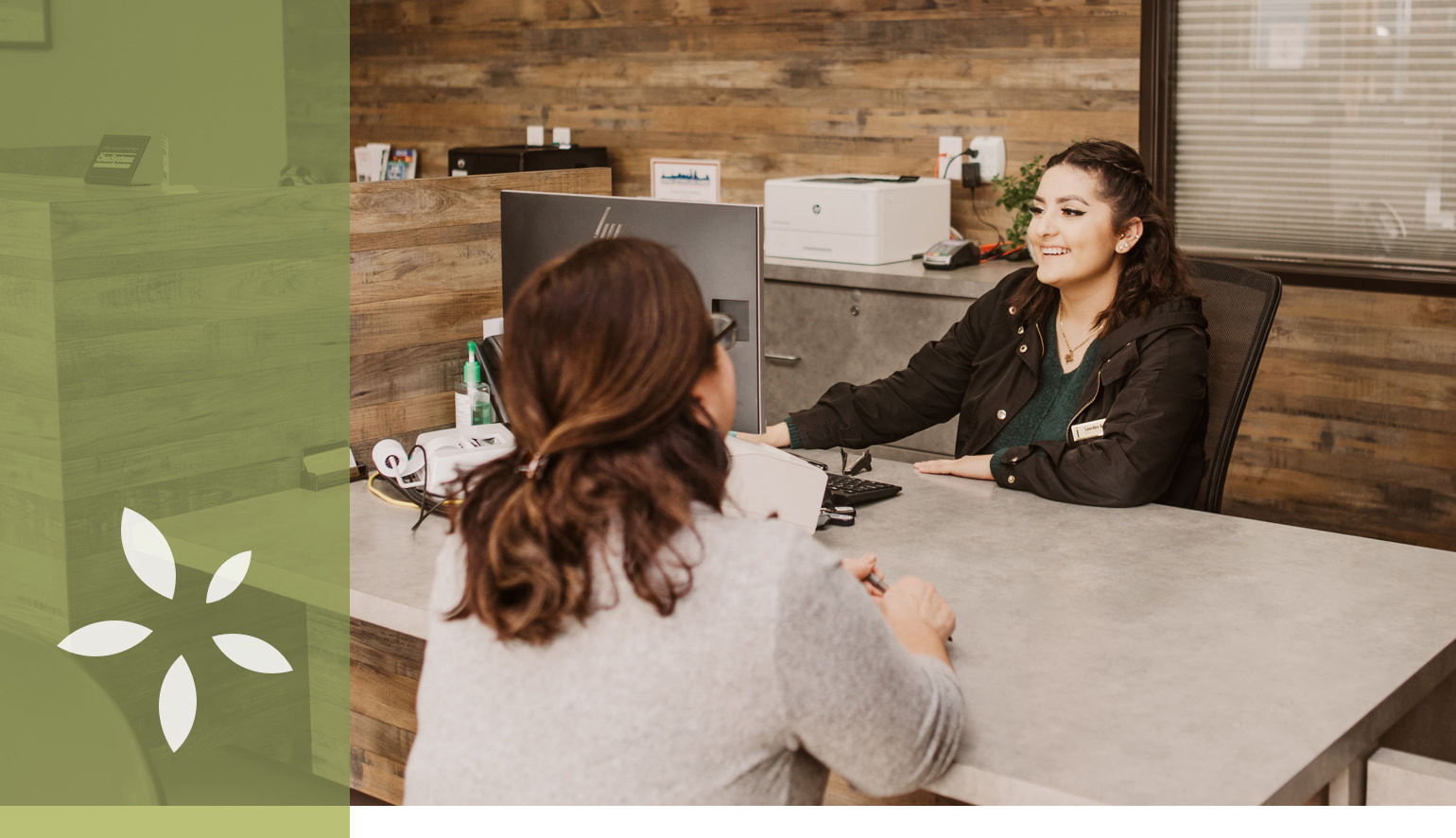 Lighthouse has faced challenges too, particularly when trying to reach more clients. As a Community Development Financial Institution (CDFI), Lighthouse serves people in low-income communities rather than well-heeled shareholders. While critical, this focus also presents challenges that traditional banks don’t experience when trying to grow and expand.

Determined to assist more underbanked people, Lighthouse went looking for solutions and found that some CDFIs use philanthropic tools to generate capital. To explore these options, the credit union enlisted the technical expertise of the Community Foundation, which helped them establish a designated fund and source donations in support of its long-term goals.

Similarly, Sanchez looked to Lighthouse to accomplish his long-term goals. For someone who landed in Portland with only a bag of clothes to his name, financial stability was a major hurdle.

Lucky for him, the credit union partnered with a local nonprofit to form Lighthouse Resource Center, which helps people map a road to financial recovery. For Sanchez, that road included clearing up old debts that barred him from renting. Soon enough, he had an apartment, a bank account and a loan through Lighthouse; all with the aim of rebuilding his credit.

Charlton says the peace of mind and financial freedom he found has allowed him to focus on other major goals, like finding a job. Today he’s shuttling veterans to and from appointments full-time for the Portland VA Medical Center, and his sights are already set on his next stop.

“My goal, in at least the next two years, is to get into a house. I’ve moved around a lot, so it’s going to feel good to settle in and build equity.”

Whenever he reaches that point, he knows that Lighthouse will be there.