George Propstra grew a passion for food while running his family’s Vancouver creamery. He shared this love with the world in 1961 when he opened his first Burgerville USA. Over the next few decades, he grew this regional chain to 32 stores and became southwest Washington’s most famous restaurateur in the process.

He never forgot his roots though. George prided his restaurants on friendly service, but also the fresh food he purchased from local businesses. For him, this was just as much about investing in local jobs and families as it was the food. In Propstra’s mind, there was little to life without community. Even a meal wasn’t the same without a group of happy, healthy friends to enjoy it with.

His strong work ethic, caring heart and community pride contributed greatly to his success, but also led him to give most of his good fortune back to southwest Washington. In a matter of 15 years, George and his wife, Carolyn, contributed more than $13 million to community causes, big and small, through their donor advised fund at the Community Foundation for Southwest Washington.

Their largest contributions were $5 million for the Jim Parsley Center, $3.2 million for the community square and bell tower in Esther Short Park, $2.2 million for the Propstra Aquatics Center and $1.1 million for Propstra Stadium at Hudson’s Bay High School. Their many smaller gifts included flood relief funds for Woodland residents, handicap-accessible playground equipment at local schools and strong support for the “I Have a Dream” program. 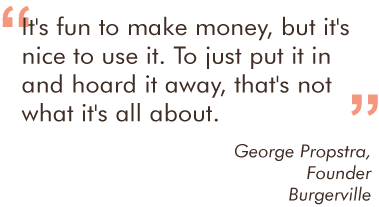 Those who knew George Propstra well, say he realized that he couldn’t take his wealth with him and decided that he would rather see it put to good use while he was alive. And see it he did. In his final years, Propstra frequented the renewed Esther Short Park and watched it pump new life into Vancouver’s downtown revitalization effort.

We remember George for his direct and focused giving. He was constantly looking for ways to help out and, even in passing, continued his giving by transferring his donor advised fund into the Community Giving Fund. Today, George’s spirit is living on through this fund’s annual grants program and more than 1,500 Burgerville employees who uphold his passion for serving people and their communities every day.