First Citizen of 2013 is man of can-do spirit

Chosen as Clark County’s First Citizen because of his remarkable can-do spirit, Robert Schaefer offered a few gentle words of chastisement Tuesday for some can’t-do leaders in a far-off city where decisions supposedly get made.

“We need to start working together,” said Schaefer, a former Democratic state legislator and still-practicing lawyer at age 83, during a gathering in his honor at the Hilton Vancouver Washington. “We don’t seem to have the personal relationships we had then. That’s a sad commentary.” He evoked the names of Pacific Northwest political giants that he used to work with — people like Sens. Mark Hatfield, Henry “Scoop” Jackson and Warren Magnuson, and Rep. Julia Butler Hansen — and recalled the times those folks used to socialize with their rivals over meals, and politics be damned.

“They had a great tendency to work together to solve problems,” Schaefer said. “I don’t think you see this today on the local or federal level.” He said politicians today “are not willing to come to compromise. All you who have served as public officials know, you don’t always get your way.”

Schaefer said he has come to believe in the saying: “‘If you’re not part of the solution, you’re probably part of the problem.’ I see that today.”

Schaefer’s solutions are seen all over Clark County. Beautiful places such as Battle Ground Lake State Park, educational institutions such as the Vancouver campus of Washington State University, high-tech industries in Camas and even Clark County’s one-of-a-kind child care consortium all stem from his work and vision, admirers said during the celebration.

“Bob was the guy who really pulled a lot of people together” to get a branch campus of Washington State University sited here, Columbian Publisher Scott Campbell said. “He was the guy who did the heavy lifting. It wasn’t simple.” 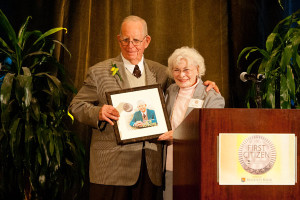 Schaefer becomes the 72nd in a line of First Citizens who have been chosen nearly annually since 1939. A whole parade of those First Citizens were there at the Hilton on Tuesday: from former state Rep. Val
Ogden to restaurateur and philanthropist Mark Matthias to former Vancouver Mayor Royce Pollard to historian and former city councilwoman Pat Jollota. A committee of these First Citizens chooses the next First Citizen each year, according to Community Foundation president Jennifer Rhoads.

“I am amazed at the giants here in our community,” said Rhoads, choking up a bit. “We have some wonderful role models. We hope we can serve this community as well as you have.”

Jollata said receiving the First Citizen Award is both like getting the Oscar and like “being at your own funeral.”

“It’s humbling because you suddenly look back at all these people you’re following,” she said.

Schaefer offered a thumbnail sketch of his life: He and his sister were adopted by a Clark County couple whose friends tended to be leaders, he said. “I learned from watching them … to try my best each day to help others.” He grew up and attended school in Clark County; he met his wife of “59 years plus” at Clark College; he became a lawyer, joined the Clark County Prosecutor’s Office and then became an Army Reservist. He and his new wife were assigned to an “Arctic Test Center” where it was often 60 degrees below zero and they lived in a trailer home.

“Those were some of the happiest days of our lives,” he said.

Schaefer returned to Clark County and law practice, and ran for the legislature. That was in 1958; he said his total campaign expenditure that first time was a whopping $560. “We made all our own signs. The garage was a mess,” he said.

Schaefer served four terms in the legislature, from 1959 to 1967, and was Speaker of the House in his final term. His time as legislator is noted particularly for the acquisition of land for Battle Ground Lake and Paradise Point state parks. And even after he returned to private life, Schaefer’s lobbying work was noted for bringing economic development and educational benefits home to Clark County.

In addition to bringing such high-tech employers as SEH America and the WSUV campus to Clark County, Schaefer helped create the Southwest Washington Child Care Consortium, which has grown to become the largest community-run child care system in the nation. And he helped create Helping One Student to Succeed, a private tutoring and mentoring company that has served more than 1 million students since its founding in the early 1970s.

“His commitment of time, intelligent thought and hard work — all for the betterment of fellow citizens — is widely recognized,” wrote Twyla Barnes, the superintendent of Educational Service District 112, in support of his First Citizen nomination. “Bob’s efforts have never been perfunctory. Rather, he approaches any and all endeavors with a thoughtful, energetic fervor that inspires his peers and delivers impressive results.” 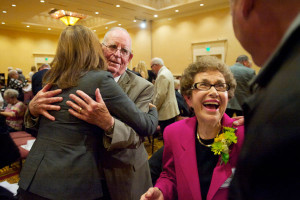 Schaefer’s wife since 1954, schoolteacher Sally Jo Schaefer, was named Clark County First Citizen in 1984 for her volunteerism and work with the Clark College Board of Trustees. The couple have three grown children and many grandchildren.

Jollota recalled spotting Schaefer’s name on an application for some hardworking city commission — an extremely
unglamorous assignment that she called a “work gang.” Why in the world, she asked, would such an important person volunteer for such a grind? Because it was a way he could serve, he told her. Simple as that.