Give Flight to Dreams

In 1996, as a senior at Columbia River High School, Lacey Edmonds’ dreams were soaring high. She envisioned a future working as a pilot, and her heart was set on contributing to international humanitarian efforts.

By age 30, many of her dreams had come true thanks in part to support she received through the Ken and Dean Kirn Scholarship Fund held at the Community Foundation. The Kirn’s generosity helped chart Lacey’s course by allowing her to attend Trinity Western University in British Columbia – one of the few
schools on the continent that allowed her to pursue
her twin passions: international studies and aviation. 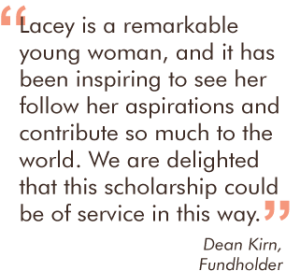 Soon after graduation, Lacey put her degree to use by signing on with the humanitarian organization Air Serv International. Stationed in West Africa for three years, she courageously flew a twin turbo prop plane between various refugee camps within the conflict-torn countries of Guinea, Sierra Leone, Ivory Coast and Liberia. She provided what international aid agencies call “last mile” air transport, which focuses on delivering goods and services directly to those in need of assistance.

Unfortunately, in this region, that assistance often revolved around the tragedy of war, and Lacey’s “last mile” flights became the last hope for victims with critical wounds. Without these flights, urgent medical evacuations would be jeopardized by a two-day road trip. Needless to say, these refugees were grateful to have Lacey’s talents and cunning spirit on their side. Ken and Dean Kirn are just happy to have fueled a young girl’s dreams so that she could better navigate those dangerous runways as a brave woman.

During her time in Guinea, Lacey met Sean Pittman, a United States Marine stationed at the U.S. Embassy. The two married and made a home in southwest Washington where they are now raising their three children. To this day, Lacey continues to dream big. She is applying her lofty visions to a career at Horizon Air and has not forgotten the importance of humanitarian aid, a cause that will always hold a piece of her heart.